When we talk about fashion, we talk about Paris, Milan, New York, London, and Tokyo. Sometimes Rome, Los Angeles, Hong Kong, or even Moscow might get a mention. But few will have heard of Ponzano Veneto. Yet, located about 20 miles north of Venice, this town of some 13,000 inhabitants has its place in the history of fashion and retail because it’s the home of Benetton.

United Colors of Benetton was founded in 1965 by siblings Luciano, Giuliana, Carlo, and Gilberto Benetton. Clothing worker Luciano had been selling sweaters made at home by Giuliana to stores in nearby Treviso since 1955 before Carlo and Gilberto came aboard in 1965 and Benetton opened its first factory.

The brand the Benettons went on to build is important not only because of the clothing but because of the way it was sold. For those wanting to learn how brands today market their products successfully in a crowded global marketplace, there is no better case study than Benetton. But before we get to the marketing, let’s start with the clothes.

Design
Benetton’s clothing was never anything particularly new. With the company’s expertise in knits, the original products were fun, easy-to-wear, and distinctly Italian. There was a flair to them, and they were soft and touchable in an age of polyester. But most importantly, they were colorful.

This is lesson number one: when the industry zigs, it’s beneficial to zag. Nearly two decades before the rainbow-hued ’80s, the fashion world skewed largely beige and its materials were often itchy. Hippie culture flew counter to this — bright, comfortable, and colorful. Benetton understood the power of youth movements from the get-go and leaned fully into the future. 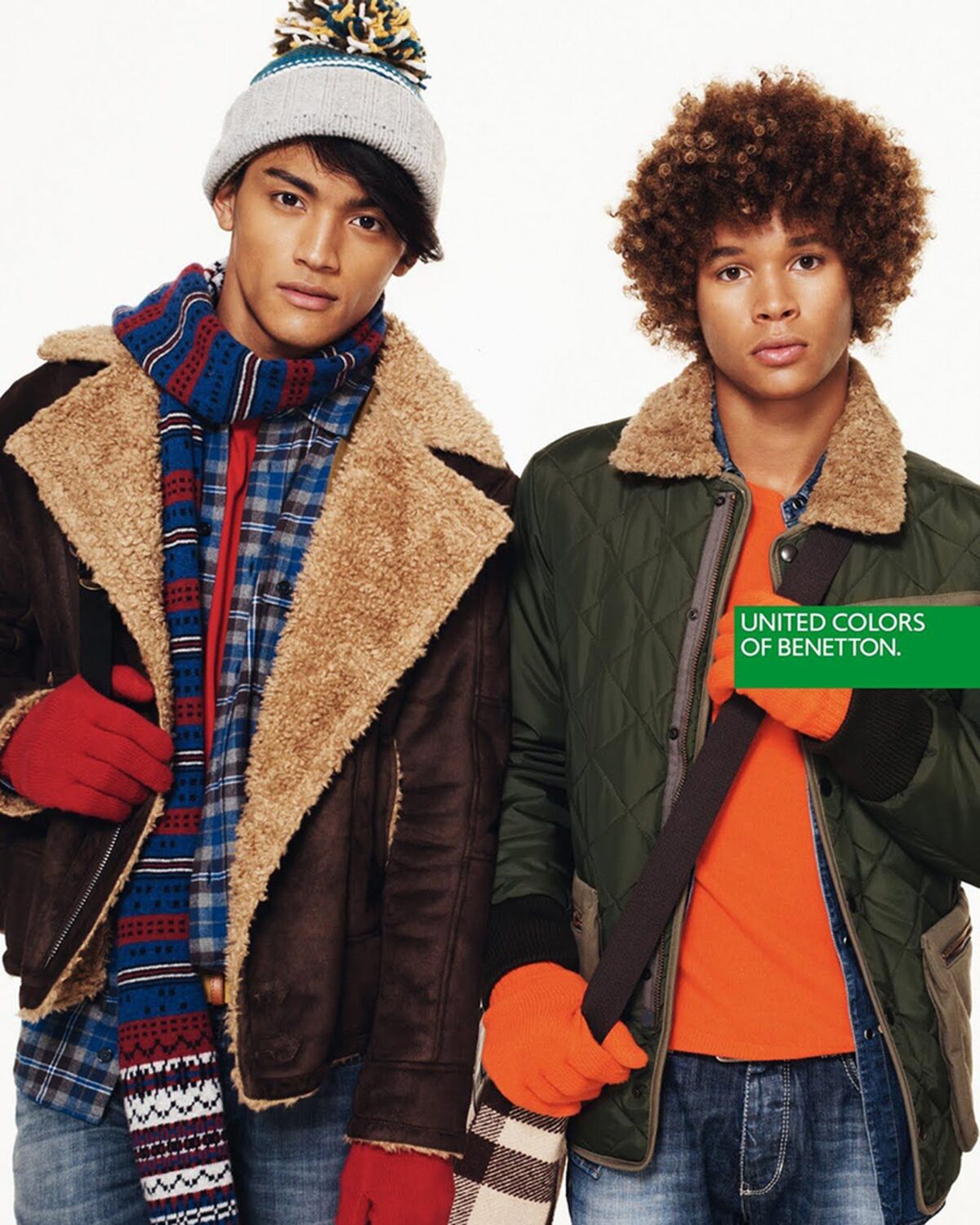 Since the beginning, Benetton applied the aesthetics of the underground to the clothing of the aristocracy. The brand helped popularize a piece that’s now fairly ubiquitous, the pique polo shirt. By the ’90s, Benetton’s polos and rugby shirts in various colors were a bona fide phenomenon.

The brand also churned out silky pastel Oxfords, an item made de rigueurin Italy by industrialist and style icon Gianni Agnelli, who famously wore his button-down collars untethered in an act of subtly defiant sprezzatura. From windbreakers and anoraks to loose-fitting pop-color sweatsuits, puffers, and bucket hats — all crafted in rainbow colors — the Benetton design language remains as relevant today as it ever has.

The Benetton brand was built on three elements: family, comfort, and color. As a family-run business, Benetton could market itself as caring and lovable among a world of corporate behemoths. Comfort-wise, it made items that were pleasing to the touch. But most distinctively, Benetton’s United Colors gave the brand license to embrace the full spectrum of humanity, promoting itself as diverse, fun, and playful, unlike competitors, which often appeared stark and serious.

By the ’80s, this creative vision had been truly unlocked, with bright, diverse ad campaigns driving the brand in international markets.

Perspective
The heart of the Benetton brand was having a point of view decades before the term “purpose-driven marketing” was being flung around corporate boardrooms as a euphemism for “What can we do to sell more shit?”

In the ’60s, advertising’s youthful upstarts paired copywriters and designers together, ushering in a “creative revolution” that led to ads that were funnier, more ambitious, and focused on building brands through storytelling. But no major fashion brand had used advertising to deliver political and social statements quite like Benetton.

Much of this was due to the influence of Oliviero Toscani, the controversial Italian photographer and art director who joined the company in 1982 and was responsible for campaigns that tackled issues such as inequality, racism, and corporate hypocrisy. 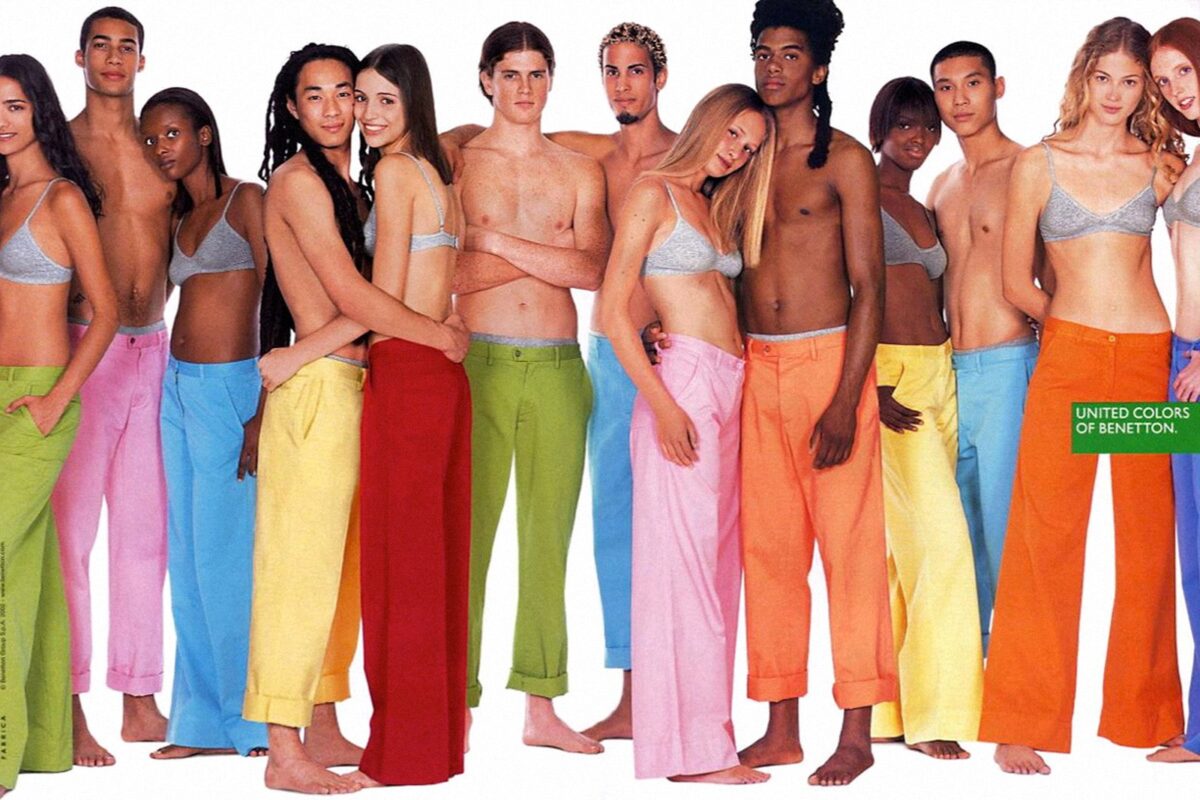 Some memorable ads featured a nun kissing a priest, a set of identical “human” hearts (they were actually pig organs) with “White,” “Black,” and “Yellow” written on them, and a startling series of ads featuring real-world photography, including a newborn baby with its umbilical cord still attached, a mafia murder scene, a gay interracial family, and an AIDS patient dying in hospital.

Toscani was eventually forced out of the company when he featured 26 death row inmates in a 2000 ad campaign titled “Looking Death in the Face,” generating a backlash from the families of murder victims. The campaign included a 96-page supplement in Talk magazine called “We, On Death Row,” featuring profiles of the inmates that focused on their regrets but with few details about their crimes.

He returned in 2017 alongside Luciano Benetton, who had stepped down in 2012, and has picked up where he left off, crafting stimulating advertising for the brand. 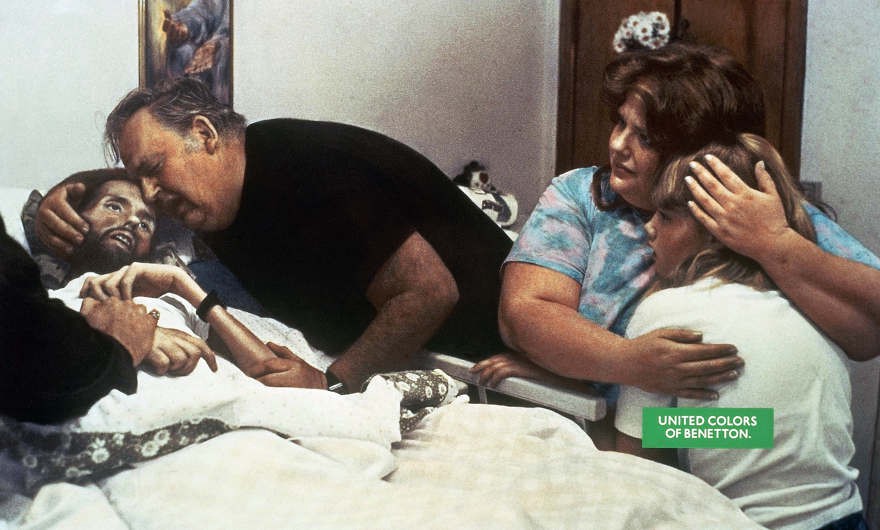 Benetton’s shocking AIDS awareness ad got the brand into trouble with the family of the young man pictured dying in the hospital.

Benetton’s advertising approach was controversial, almost proto-viral in the days pre-social media, and showed how brands can be built on the unexpected. Benetton also launched what would go on to become one of the most influential magazines in graphic design, COLORS.

Dubbed “A magazine about the rest of the world,” it was created by Toscani in 1991 alongside graphic designer Tibor Kalman and writer Karrie Jacobs, and presented as an embodiment of the Benetton family’s humanistic worldview. Its use of design and photojournalism led to awards, taking on issues from around the world with grace and empathy. It became a hotbed of talent, with contributors going on to become some of the top art directors and artists of their generation.

Since 2011, it pivoted to becoming a series of “Survival Guides” on a variety of cultural and social issues, from transportation and urban planning to the concept of apocalypse and even the socio-politics of football. Long before immersive media experiences became the norm, COLORS hosted events and gallery shows, launched music compilations, and produced documentaries.

What do subjects such as AIDS, religious oppression, racism, or the death penalty have to do with sweaters? Nothing. And Benetton’s advertising and media approach alienated and appalled many people over the years. But for those who “got” what Benetton was doing, COLORS and Toscani’s art direction made Benetton a company that got people talking. Benetton had, and still has, a perspective, which is more than most consumer brands can claim. 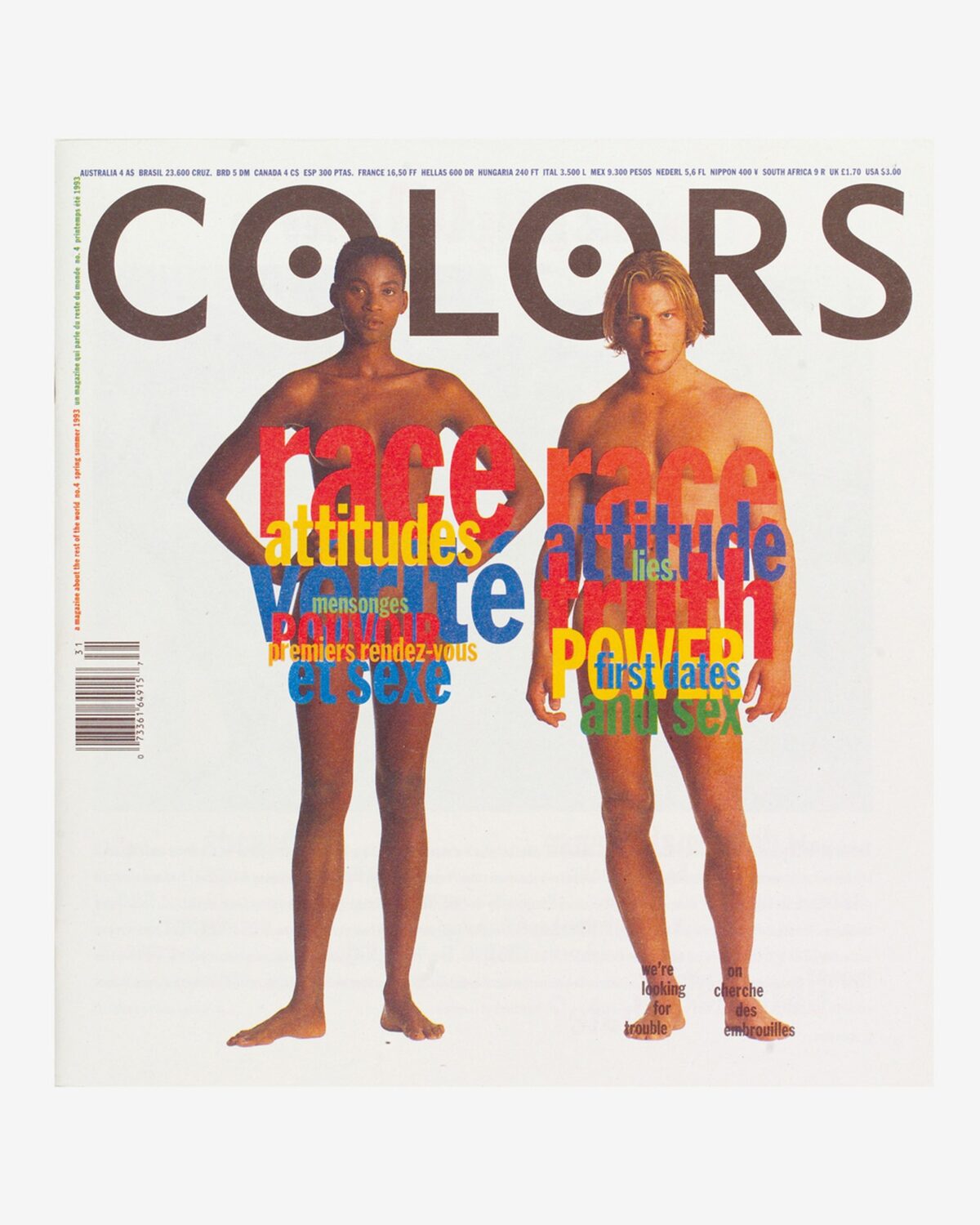 Moving Forward
It can’t be overstated how much brand recognition Benetton enjoyed by the ’90s. The brand’s preppy aesthetic was always doused with a healthy splash of social awareness and European joie de vivre that its competitors all too often lacked in their lifestyle-focused self-seriousness. Benetton was worn by skaters, hipsters, yuppies, celebrities, and hip-hop heads alike. It expanded, perhaps too much and too quickly, to thousands of storefronts all over the world, and these days the label doesn’t have quite the same clout it once enjoyed.

But while Benetton might not be as attention-grabbing as in its heyday, the brand is not to be underestimated. It recently appointed Jean-Charles de Castelbajac as artistic director. The Moroccan-born French designer, inventor of the teddy bear coat, is perfectly on-brand for Benetton. 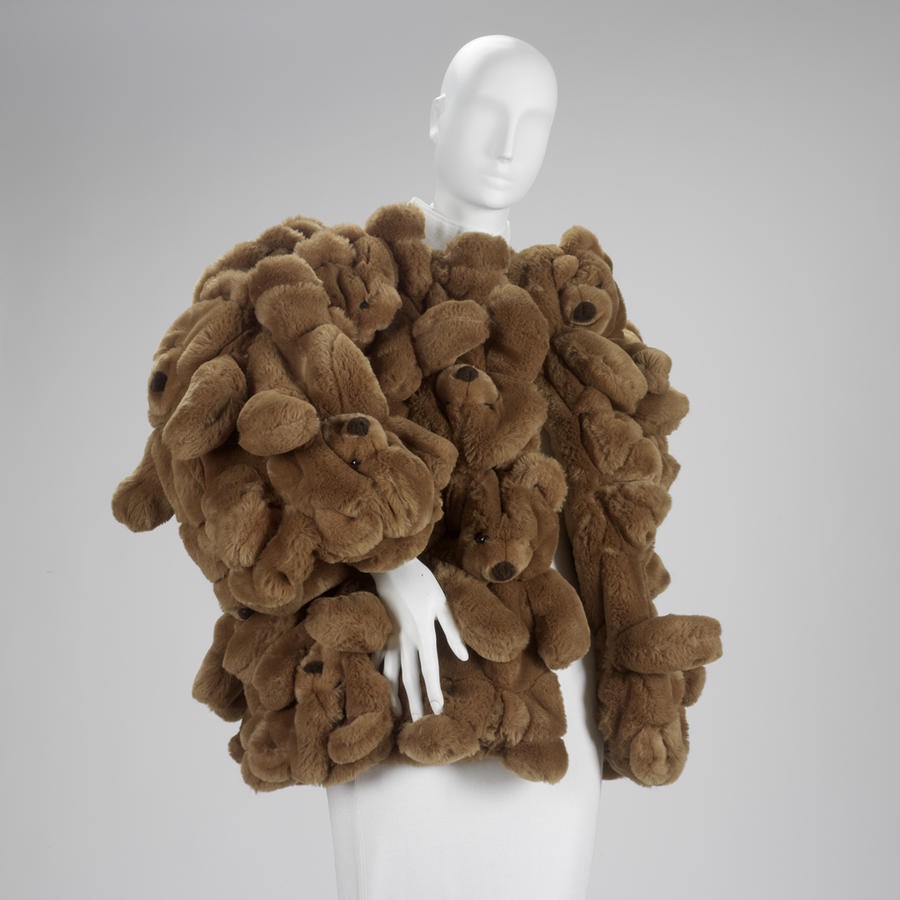 Streetwear fans are probably most likely to recognize de Castelbajac’s name thanks to the recent Palace collaboration, but he is one of the most prolific and creative thinkers in the industry. A veteran of both pop and punk culture, de Castelbajac’s bold and influential use of color pairs perfectly with the Italian brand.

Meanwhile, as the clothing label’s fortunes have dipped, the Benetton family portfolio of investments has evolved to encompass fields such as construction and insurance. In fact, only a fraction of the family’s $13.3 billion fortune is now invested in fashion. That wealth fell by $2 billion last year, however, in the wake of the tragic collapse of a bridge in Genoa, an event in which 43 people died. The family owns 30.25 percent of construction company Atlantia, which was responsible for the management of the bridge.

In fashion, Benetton the brand and its United Colors might be diminished, but it remains enshrined in the popular lexicon. Brands that embrace diversity and social issues are often referred to as “the Benetton of” their space. And under the stewardship of de Castelbajac, now could be the time for the Benetton clan to refocus on the thing their name is synonymous with: fashion presented provocatively with a social conscience — and plenty of color.

You are using an outdated browser which can not show modern web content.